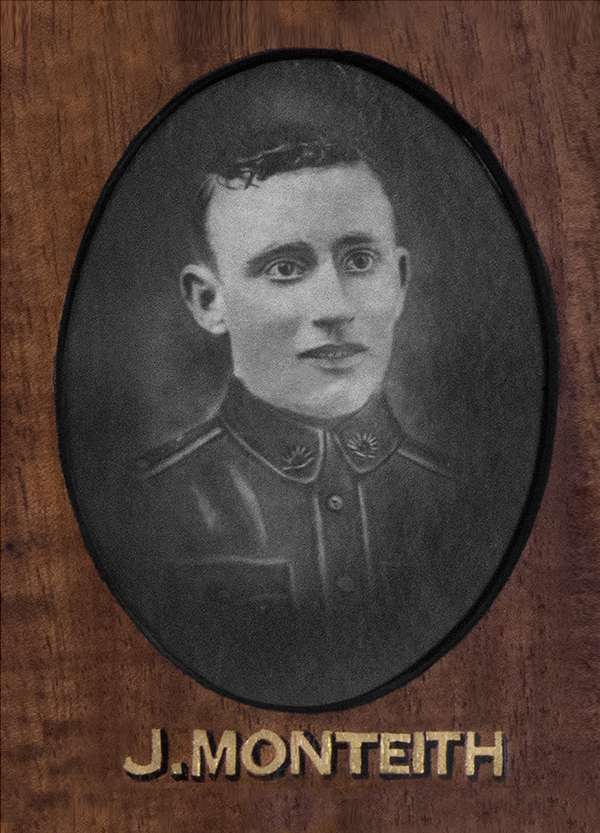 Additional Information Name is listed on Williamstown Honour Rolls published in the Williamstown Chronicle 1915-1919 as Monteith, F or F C Monteith, not J Monteith as on the Honour Board. Frederick, whose mother Alice lived in Nelson Place, Williamstown, enlisted May 1915 into the 18th Battalion, which was raised at Liverpool in New South Wales as part of the 5th Brigade. It left Australia in early May and trained in Egypt from mid-June until mid-August.  They landed at Gallipoli on 19 August 1915 where they camped at North Beach between the foot of the Sphinx and Walkers Ridge. Following an initial attempt to secure a low rise in the foothills, known as Hill 60, on 19th August, the newly arrived 18th Battalion were committed to a further attack.  Their attempt to take Hill 60 also failed.  The 18th had left North Beach 760 strong. In four hours on 21 August the battalion took 383 casualties, of whom approximately 190 were killed. In subsequent actions on Hill 60 the unit suffered another 256 casualties.  On the 29th August, following a further three days, of intense fighting by British, New Zealand and Australian units, the Hill was still not secured, and the attacks were called off. A telegram from Colonel Hawker of the Victorian Barracks in Melbourne to Reverend Baird reported that Frederick died between 21st to 25th August.  The official date of his death is 22nd August 1915.  Frederick's body was never recovered.  He has no known grave.  He is remembered at the Lone Pine Memorial, Gallipoli Peninsula. Fred's younger brother Clive enlisted in Victoria in March 1915.  He served in Egypt, Gallipoli and the Western Front.  He returned safely to Australia in January 1919. The telegram, Christmas card and photo on this page were found in a photo album and tin box belonging to Fred's sister Stella and donated to Sons of Williamstown by Frederick's great niece, Judith O'Neill.
Additional Documents and Photographs Click on the image to see a larger view