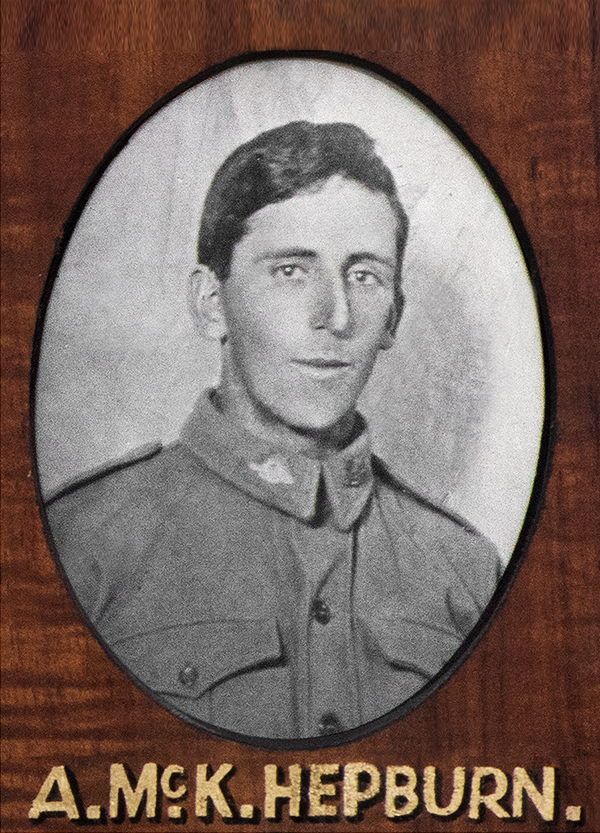 Additional Information Alec McKenzie Hepburn enlisted with the second contingent of 42 Williamstown enlistees and sailed with the Second Convoy of 19 ships which departed from Albany, Western Australia on 31 December 1914. He was associated with Newport Methodist Sunday School as a scholar, librarian and secretary.  Prior to enlistment was employed at Varley's Pty Ltd. Alec Hepburn enlisted as a private, was promoted to Lance Sergeant 1 February 1915 and to Sergeant 2 June 1916. After being wounded at Gallipoli he wrote to his parents from hospital in Alexandria describing how he was wounded and the conditions at the hospital.  He wrote that he was the only one of the 14th Battalion amongst the 50 other patients at the hospital. After falling ill in France he was sent to 1st London General Hospital, Camberwell, where he died on 12 November 1917. His parents were informed that his coffin was draped with the Australian flag and the 3rd London Regiment supplied a band, firing party, bugler and pallbearers.  His brother, Lieutenant Edward Andrew Hepburn was in attendance.  Edward Andrew Hepburn (793) enlisted June 1915, returned to Australian July 1919
Additional References Williamstown Chronicle, Saturday 26 December 1914, p3; Saturday 26 June 1915, p2 and 24 November 1917, p3
Additional Documents and Photographs Click on the image to see a larger view