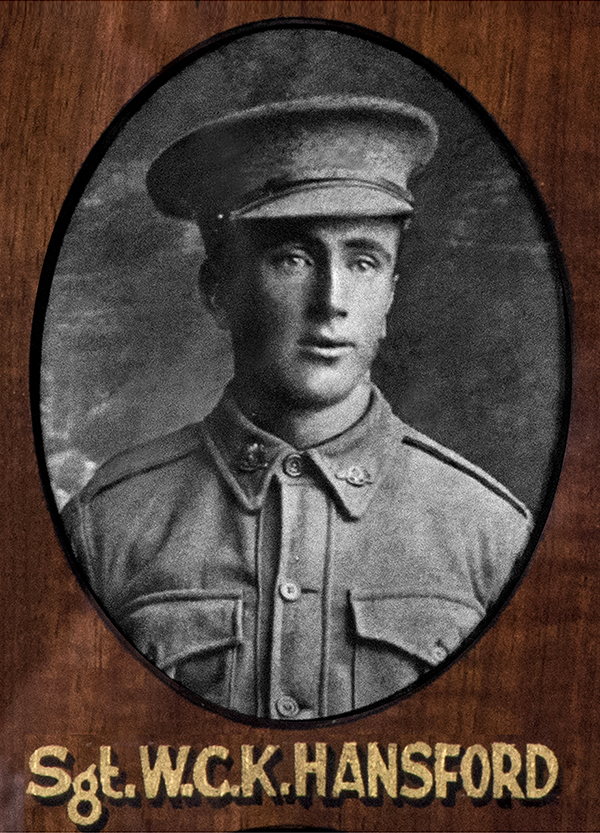 Additional Information William Hansford enlisted in the 21st Battalion which was raised as part of the 6th Brigade at Broadmeadows in Victoria in February 1915. Its recruits hailed from all over the state. The 21st Battalion arrived in Egypt in June 1915. As part of the newly raised 2nd Australian Division, it proceeded to Gallipoli in late August aboard the SS Southland.  On 2 September 1915 the Southland was torpedoed near the island of Lemnos.  At least 9 men were killed, however, all but 40 of 1400 men on board took to the lifeboats and were picked up by other ships in the area.  The ship did not sink and was eventually sailed to safety. The battalion finally landed at ANZAC Cove on 7 September. After evacuation from Gallipoli in December 1915, William Hansford arrived with the 21st Battalion in France in March 1916. In April, it was the first Australian battalion to commence active operations on the Western Front. During the battle of Pozieres it was engaged mainly on carrying duties, but suffered its heaviest casualties of the war during the fighting around Mouquet Farm. William Hansford was awarded the Military Medal for conspicuous gallantry and skill in charge of a Lewis Gun during the attack on the enemy’s trenches at Mouquet Farm on 29 and 30 June 1916.  In December 1916 he was awarded the Serbian Silver Obilich Medal for distinguished services during the Mediterranean Expeditionary Force Campaign. In early May 1917, the battalion fought at Bullecourt, where William Hansford received gunshot wounds to the lung, arm and leg.  He was admitted to the 5th General Hospital, Rouen, France where he died on 30 May 1917.
Additional References Williamstown Chronicle, Saturday 11 August 1917, p2 SS Southland, Australian War Memorial 21st Australian Infantry Battalion, Australian War Memorial
Additional Documents and Photographs Click on the image to see a larger view