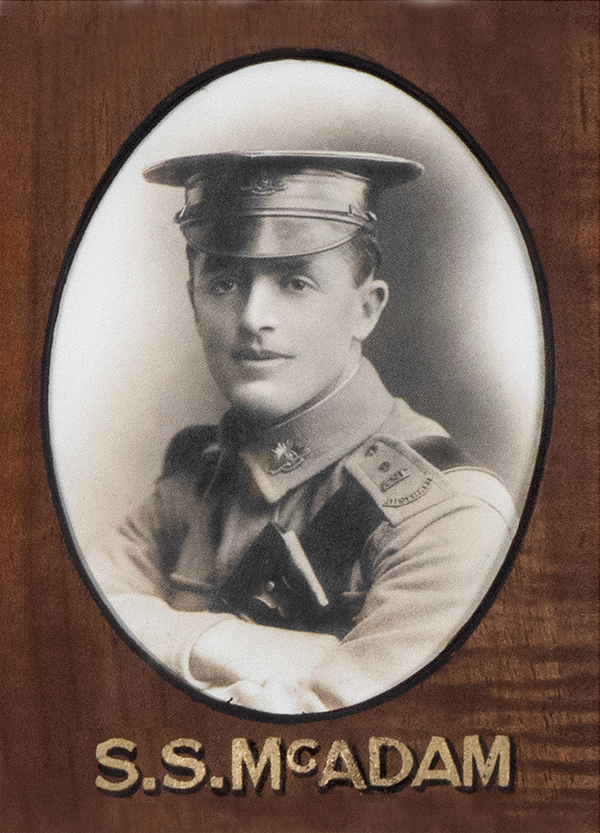 Additional Information Stephen Smith McAdam doesn’t rest in one of the many overseas World War 1 graves and his name isn’t memorialised at Lone Pine, the Menin Gate or the Villers-Bretonneux Memorial.  He is one of the many servicemen who died in his home country after the war had ended.   Stephen Smith McAdam is buried in Williamstown Cemetery. Among the second contingent of 42 Williamstown enlistees, Stephen (Steve), a shipwright, enlisted in the 300th Mechanical Transport Company and embarked on the HMAT Ceramic on 22 December 1914. Driver McAdam was accidentally wounded in December 1915 by shrapnel from a live shell being taken apart by his Sergeant to keep as a souvenir.  The explosion killed the Sergeant and injured Steve and one other serviceman.  Following time spent in hospitals in France and England, Steve McAdam was invalided to Australia in May 1916 where he was admitted to Caulfield Military Hospital.  A number of operations to remove the shrapnel were unsuccessful and Steve, like many other invalided servicemen spent a number of years at the Highton Rest Home. Highton, now part of the Camberwell Grammar School, was donated by William Doery to the Red Cross to be used by convalescing returned servicemen. Highton remained in use until January 1920, by which time 832 men had passed through its doors. Following Stephen Smith McAdam’s death in April 1919, a brass tablet was unveiled in the South Presbyterian Church in his memory.  It was a gift from the staff and fellow soldiers of the Highton Rest Home.  It was reported at the unveiling of the tablet that despite constant suffering, Steve ‘was never heard to murmur but faced all with a smile’.
Additional References Williamstown Chronicle: 26 December 1914, p3;  9 March 1918, p3;  26 April 1919, p2;  11 October 1919, p3 Camberwell Grammar School Spectemur, Term 3, 2014 Photo of Highton Rest Home courtesy Moira Drew, Australian Red Cross, Victorian Division Annual Report 1915-16.
Additional Documents and Photographs Click on the image to see a larger view