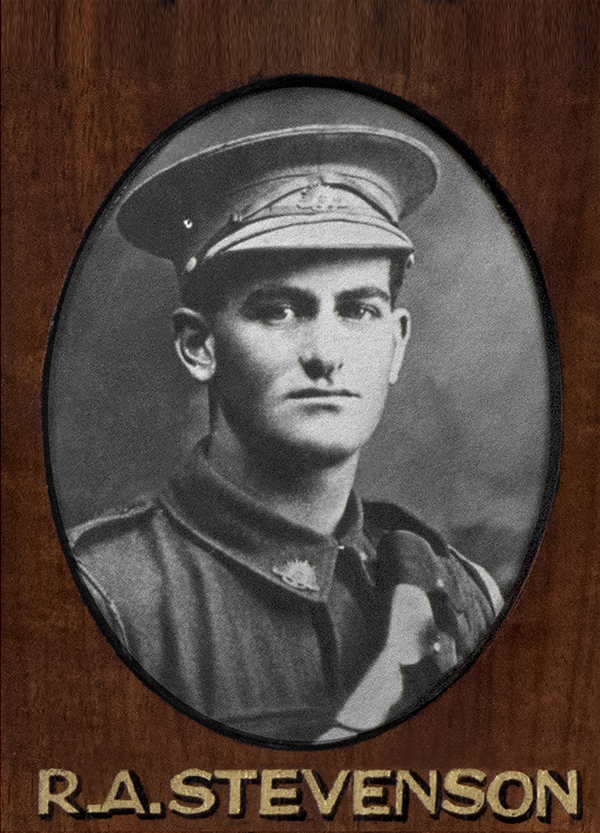 Additional Information Son of William Featherstone Stevenson and Rowena Stevenson. Following his enlistment, Robert Stevenson, was temporarily appointed to a number of units (a naval unit, the base hospital and the military police) before being appointed to the Field Artillery Brigade. Raised in September 1915, the Brigade initially camped and trained at Albert Park.  During 1917 the Brigade was in constant action, supporting allied attacks on Messines, Menin Road, Polygon Wood, Broodseinde, and then Passchendaele, as part of the Third Battle of Ypres. 1918 saw them supporting the Australia Corps during the German Spring Offensive, in Villers-Brettoneux and on to the Somme.    The Australian offensive began in August 1918 with the Brigade supporting the infantry through Peronne, Mont St Quentin, Bellicourt and the Hindenburg Line.    Exhausted from combat and illness, the brigade was relieved on 18 October. It was during one of these battles that  Bombardier Stevenson’s left leg was shattered by a shell, on 18 September 1918.  He was treated at the 1st Australian Field Ambulance but died at 9.30 that morning. Amongst his belongings returned to his wife, was a lock of hair.  Edie Stevenson wrote to the military expressing her grateful thanks for the return of so many of her husband’s personal effects.
Additional References 4th Australian Field Artillery Brigade, Australian War Memorial
Additional Documents and Photographs Click on the image to see a larger view