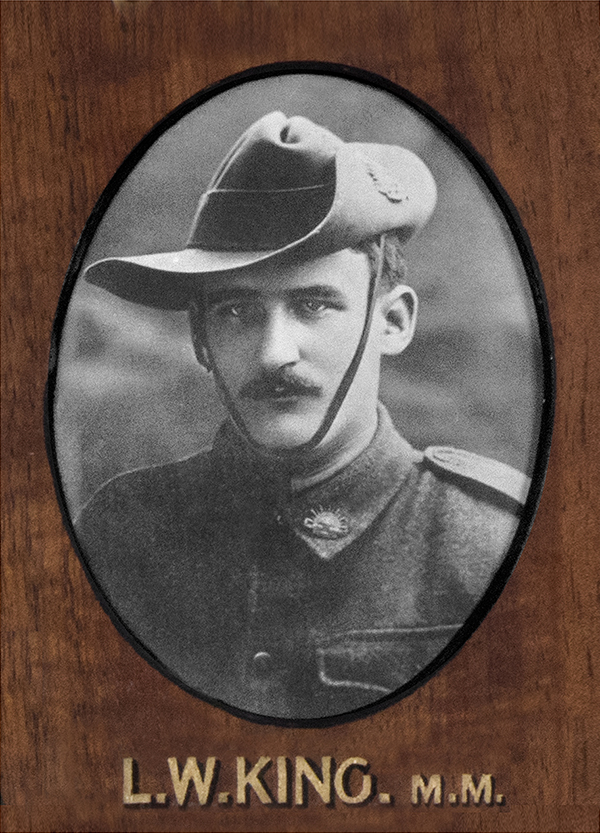 Additional Information Leslie William King attended Newport State School and was in the Naval Cadets.   Even though he'd written his occupation as labourer on his enlistment papers, his father, when filling in the Honour Roll Circular stated that Leslie's calling was as a Newsagent.  The family owned a newsagency at 267 Douglas Parade, Newport, Vic. The original address of 394 Melbourne Rd, Newport, Vic was later changed to 376 Melbourne Rd, Newport, Vic Private King (175) received the Military Medal (MM) on 4 February 1918 for bravery in the field. His Roll of Honour circular states: "Known as most persistent in duty, and the man who never 'ducked' at a shell. His medal was granted for going out (unaided) three times and bringing wounded in". He died on 25 April 1918 in Villers-Bretonneux, France, from a shrapnel wound to the head. His cousin, Pte Wallace Bruce Duncan (171A), 2nd Field Ambulance, who is also on the Williamstown Town Hall Honour Board, was killed in action on 17 April 1918 at Hazebrouck, France (a week before Leslie King).  Pte King and Pte Duncan enlisted together into the same unit and both left Melbourne on the RMS Mooltan on 18 May 1915. Following the death of Leslie King, Mrs Mary Duncan, the mother of Wallace Duncan and sister of Annie, helped out at the family newsagency business, Douglas Parade, Newport. Both Annie King and Mary Duncan travelled together to France when they were in their eighties to visit their sons' graves and erect crosses. An honour board was unveiled at the Newport Dispensary Hall for the Newport Tent I.O.R.  in December 1919.  The honour board, which was made of Australian blackwood, with fiddle-back panels, contained the names of 36 members, nine of whom had sacrificed their lives for their country, of which  L King was one.
Additional References Footscray Chronicle: Saturday 11 May 1918, p2 Williamstown Advertiser: Saturday 11 May 1918, p2 Williamstown Chronicle, Saturday 13 December 1919, p2 Family recollections: Laurel Hynes Australian War Memorial Photo DA09080
Additional Documents and Photographs Click on the image to see a larger view