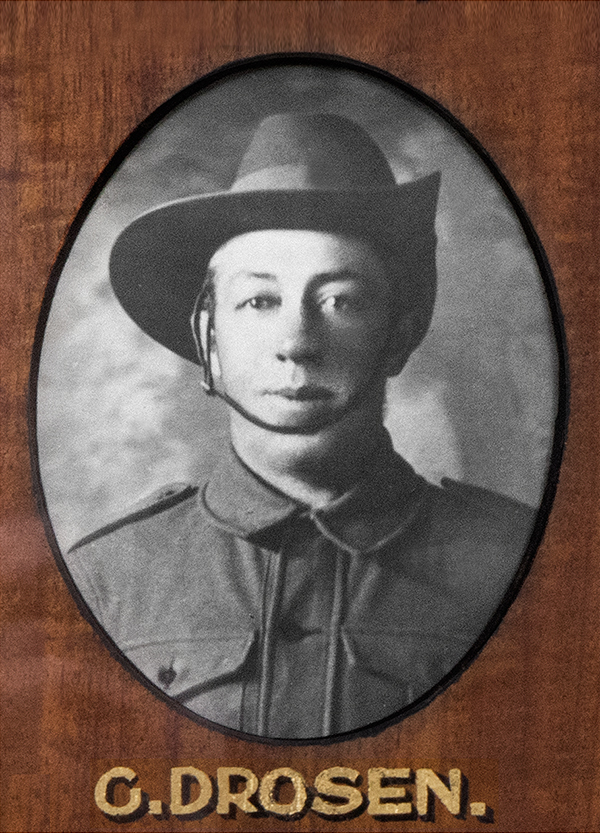 Additional Information Private George Drosen, disappeared near Mouquet Farm on 10 August 1916.  A Red Cross enquiry was held in April 1917 and a Military Court of Enquiry in May 1917. Evidence noted in the Red Cross files varied from one soldier saying that Drosen was evacuated to a casualty clearing station, where he later died from his wounds.  Another claimed he was blown to bits. Sergeant Leonard Coulson testified in the military Court of Enquiry that Drosen was with a party of 46th Battalion men withdrawing from the front line trench at about 10.30pm when a shell exploded. Most managed to work their way back to safety, but Drosen did not answer at rollcall.  Coulson went back to search for George Drosen.  Sadly George's body had been badly damaged and he couldn't find any identification papers.  He had George's body buried but had no papers to confirm it was him. The Court of Enquiry concluded that on 10 August 1916 shellfire had killed Private George Drosen. George enlisted and embarked with his brother, Ernest Drosen (4172).  Seven days after George disappeared his mother, Eliza, was informed that Ernest had been wounded.   Ernest embarked for Australia 13/02/1917 and was medically discharged in June 1917. George’s mother and sister’s in memoriam notice in The Williamstown Chronicle in August 1917 read: “I shall come again, dear mother; From my home in Heaven land; And though you may not see me; I shall often touch your hand”
Additional References Williamstown Chronicle, Saturday 11 August 1917, p2
Additional Documents and Photographs Click on the image to see a larger view