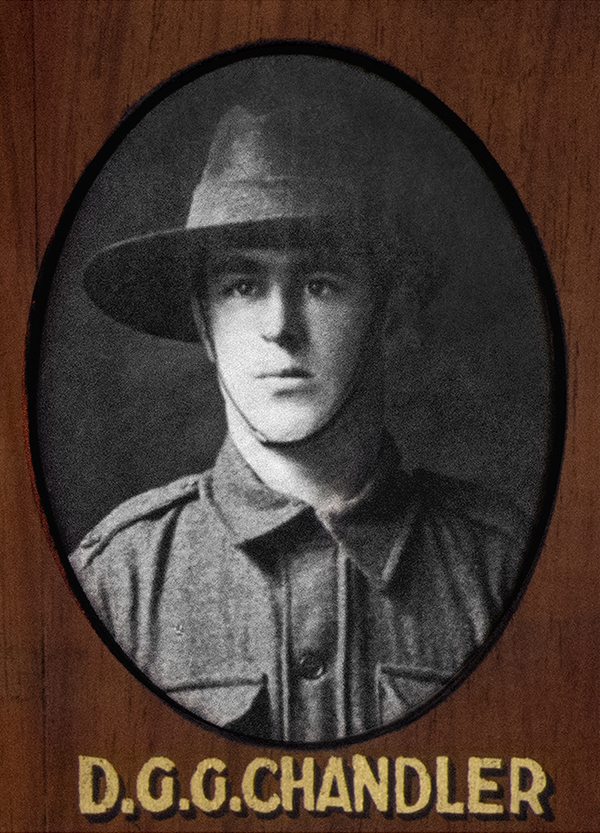 Additional Information You can view a video story on the Chandler brothers on our Video Stories page   David and Emma Chandler had 6 girls and 5 boys.  Frederick, the youngest, was too young but four of the Chandler brothers enlisted – only one returned home. When David George Gregory Chandler enlisted in the 21st Battalion in February 1917, he was the fourth of the Emma and David Chandlers sons to go to war. David embarked in May 1917 and joined his Battalion in France in November 1917, while they were recuperating following the October battle which captured the Broodseinde Ridge. He was wounded in June during the German spring offensive. On his recovery he re-joined the battle on 8 August 1918. On 1 September 1918, David was killed in action at Mont St Quentin, France.  He was aged 20. Twenty four days after David’s death, the men of the 21st Battalion mutinied.  They'd been ordered to disband because their numbers had been decimated in the 1918 offensive.  However, the order was subsequently withdrawn, and the battalion fought its last battle at Montbrehain on 5 October. The following day it became the last Australian battalion to withdraw from active operations on the Western Front. The 21st Battalion was officially disbanded on 13 October 1918. The next of kin badge sent to Emma consisted three bars to indicate that she’d lost three sons in the war.  She was particularly upset when she lost hers in 1924 and applied for a duplicate, offering to pay ten shillings for a replacement. The memories and sadness of their sons stayed with the Chandler family.  A family member recalled that their house in Princes Street was named “SEDWAR” (the initials of their three lost sons, Stephen, Edward and David plus WAR), although, as that house no longer stands, we are unable to confirm it.
Additional References Footscray Chronicle: Saturday 21 September 1918, p2 Photos and personal recollections courtesy of Max Chandler, nephew, and Kathleen Wilson, great niece Australian War Memorial, 21st Australian Infantry Battalion
Additional Documents and Photographs Click on the image to see a larger view