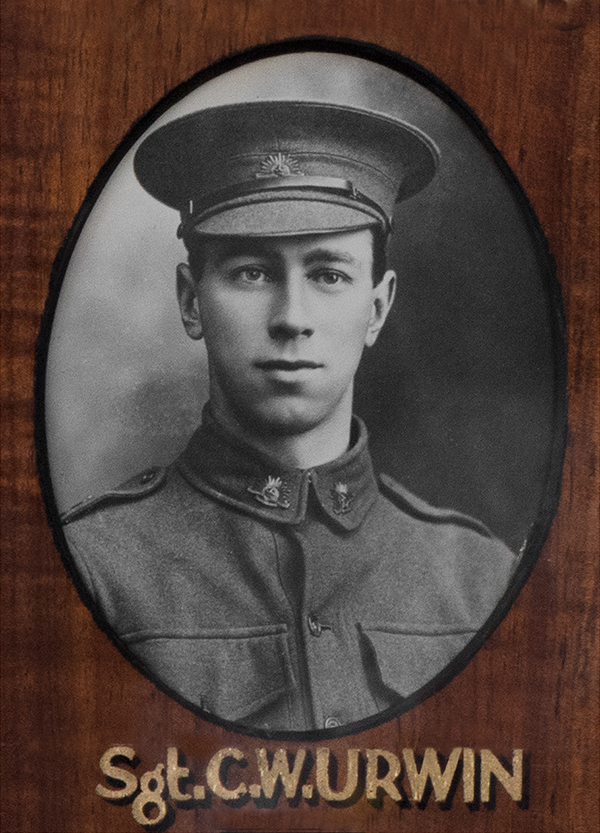 Additional Information You can view a video on Cuthbert Urwin on our Video Stories Page   Cuthbert William Urwin was the sixth child and second son of William and Eliza Urwin of Williamstown.  Cuthbert’s father, William, was also born in Williamstown in 1860.  In 1882 he married Eliza Higham, the daughter of the local butcher with whom he served his apprenticeship. As William Urwin’s butchering businesses prospered, he joined W Angliss and Co. as a Director, a position he held until the day he died in 1924. In due course Cuthbert Urwin also worked for Angliss and Co., as did his friend Claud Harris (12451). When they enlisted, Mr Urwin, Mr Stooke (Director, Angliss & Co.) and the Coach Builders Association donated two motor ambulances to the AIF, which Cuthbert and Claud were to drive. Both men spent some months training in England and were transferred to France in November 1916.  After a period as a despatch rider Cuthbert was placed in charge of seven motor ambulances.  When the German fighter pilot Baron Manfred von Richthofen was shot down near Morlancourt Ridge in 1918, Cuthbert and Claud were one of the first ambulance units to arrive at the scene. Three days later Cuthbert was on duty in Bonnay when the village was heavily shelled.  When the Bonnay A.D.S. received a direct hit, Cuthbert Urwin was killed outright on 24 April 1918. Claud Harris had the sombre task of helping to bury his friend. Claud survived the war and returned to Australia in 1919.  He honoured the memory of his friend by naming his first son Cuthbert.
Additional References Footscray Chronicle: Saturday 7 July 1917, p2 and Saturday 4 May 1918, p2 Williamstown Chronicle: Saturday 9 August 1924, p2 Williamstown Advertiser: 24 July 1915, p4 The Argus: Monday 28 July 1924, p8 Australian War Memorial: Photo of the remains of Baron von Richthofen's Fokker Triplane Photo of Urwins Butchery: Loraine Callow Photo of Plaque at Williamstown Cemetery: Lindy Wallace, Lowanna Connections Photos of men on the HMAT Runic and Claud Harris at grave of Cuthbert Urwin:  Penny Harris Jennings Information on Claud Harris and Cuthbert Urwin: Penny Harris Jennings Diary L. Cpl R C Werner, Museum Victoria
Additional Documents and Photographs Click on the image to see a larger view