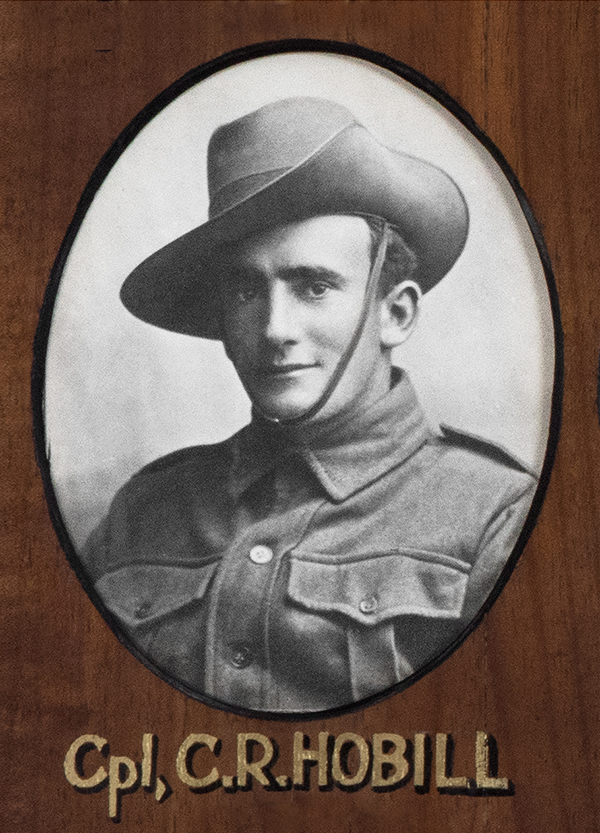 Additional Information The first of the men from Williamstown to die in the war, Charles Hobill sailed with the First Convoy of 38 ships which departed from Albany, Western Australia on 1 November 1914. Charles (known as Chas) fell ill on the Benalla on the way to Egypt but seemed to be healthy enough to his mates when they arrived at the camp.  However, he was still unwell and was taken to Mena Hospital where he passed away at 5am on the Sunday morning. When writing of his friend's passing, Percy Simmons (327) of Newport wrote that 'a dark cloud had fallen over us ... it has broken us all up ... I can hardly write this as we are in a very sad mood '.  He described how the men, Chas's friends from No. 1 Company, the 8th Infantry and all of his own No. 3 Company, including his workmates from Newport, the No.3 wheelers, had accompanied Chas's coffin to the cemetery.  His finished his letter with the words 'Poor Charles is the first to leave our ranks'.  Percy's letter can be read in the attached newspaper image. Two of his three brothers enlisted: Alfred Edward Hobill (9393) enlisted July 1915 and returned to Australia June 1919; Henry Thomas (11779) enlisted April, 1916 and returned to Australia July 1919.
Additional References Williamstown Chronicle: Saturday 30 January 1915, p3; Saturday 6 May 1916, p3 The National Anzac Centre, Albany, Western Australia
Additional Documents and Photographs Click on the image to see a larger view