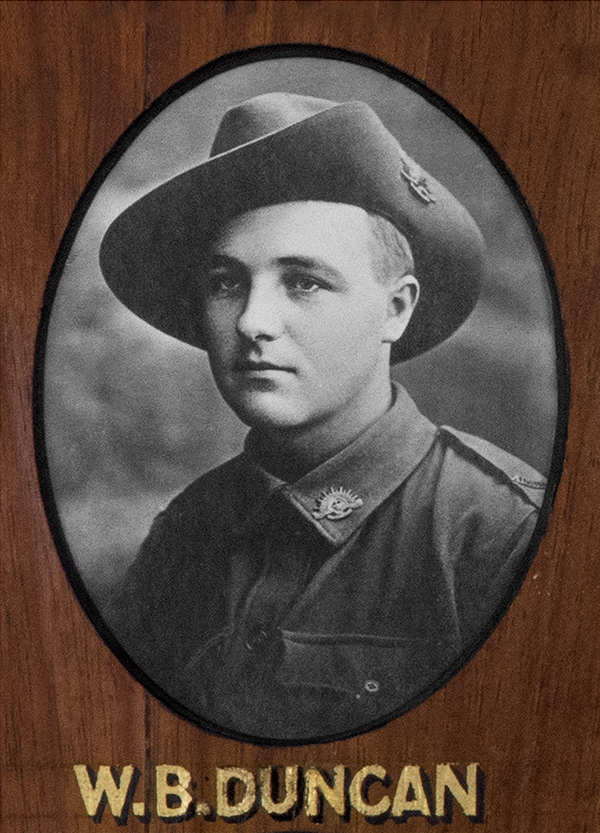 Additional Information Wallace (known as Wally) Bruce Duncan attended State School 541 East Geelong.  Mother moved from Collingwood St, Newport Vic (at the time of enlistment) to Home Road, Newport, Vic. Family recollections informed us that even though Wallace put his age as 18yrs 3mths on his enlistment papers, he was only 17.  His mother, Mary, signed a consent as she was worried that he'd sign up under a different name and she would never know if anything happened to him. Pte Wallace Bruce Duncan was killed by a German shell explosion while getting rations from a farmhouse used as the Unit's Quartermasters Stores near the La Motte Road, Hazebrouck. His cousin, Leslie William King (175), who is also on the Williamstown Town Hall Honour Board, died in Villers-Bretonneux a week after Wallace.  The cousins enlisted together, joined the same unit and both left Melbourne on the RMS Mooltan on 18 May 1915.  Following his cousin's death, Wallace's mother, Mary, helped out in the family's newsagency business in Douglas Parade. Both Mary Duncan and Annie King travelled to France when they in their eighties to visit the graves of their sons and erect crosses.
Additional References Williamstown Chronicle, Saturday 11 May 1918, p2 Family recollections: Laurel Hynes
Additional Documents and Photographs Click on the image to see a larger view