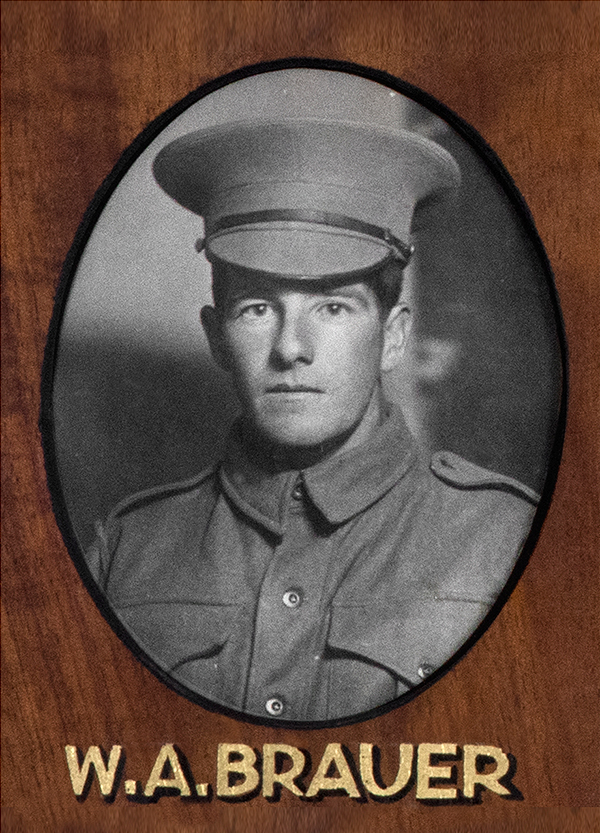 Additional Information William Brauer (known as Augie) sailed with the Second Convoy of 19 ships which departed from Albany, Western Australia on 31 December 1914. He fought with the 14th Battalion at Gallipoli and received a shrapnel wound to his left shoulder in May 1915. He was hospitalised in Alexandria and embarked for England in August 1915 with an abscess on his neck. He re-joined his unit in Egypt in December 1915 and was transferred to the 46th Battalion when the 14th Battalion was split due to the AIF expansion and reorganisation. He travelled to France with his unit in June 1916. He suffered with illnesses and re-joined his unit in February 1917. Along with most of the 4th Brigade, the 46th Battalion suffered heavy losses at Bullecourt in April 1917 when the brigade attacked strong German positions without the promised tank support. Augie Brauer was reported missing in action at Bullecourt on 11 April 1917 and declared as killed in action on that same day by a Court of Enquiry held in November 1917. Augie Brauer embarked on the Ulysses from Melbourne. As there's no mention of how or whether his effects were returned in his service dossier, the reference to the Berrima on the back of the photo in Maud Bear’s (nee Hillier) photograph album remains obscure. Augie was the step-brother of Maud's foster aunt. His brother, Ludwig Leopold Brauer (2107), enlisted in March 1915 and returned to Australia in July 1919.
Additional References The National Anzac Centre, Albany, Western Australia
Additional Documents and Photographs Click on the image to see a larger view