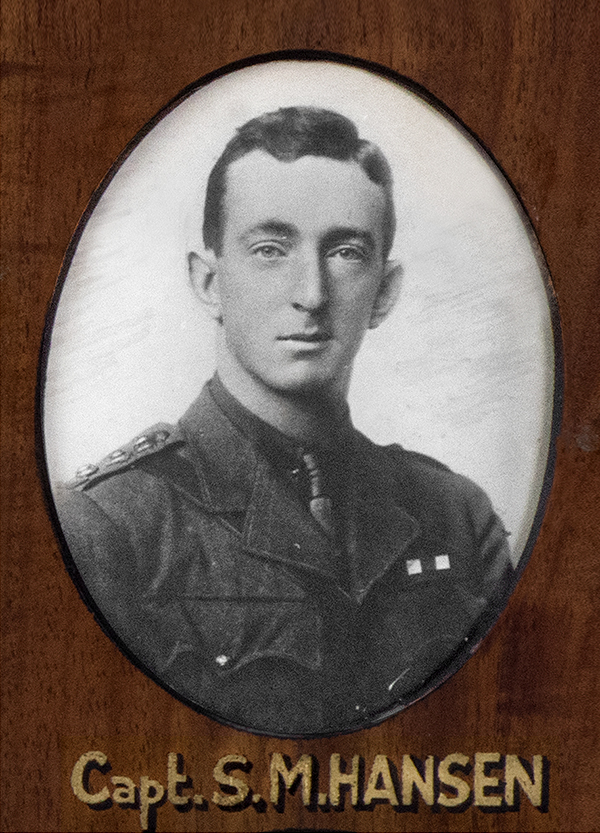 Additional Information You can view a video on Stewart Murray Hansen on our Video Stories Page   Stewart Murray Hansen enlisted with the second contingent of Williamstown enlistees and sailed with the Second Convoy of 19 ships which departed from Albany, Western Australia on 31 December 1914. Enlisting as a Private in the 14th Battalion in September 1914, he fought with his Battalion in the many battles of the Gallipoli campaign.  During this time he was promoted to Second Lieutenant in May 1915; Lieutenant in January 1916 and Captain in March 1916.  His service as a temporary Company Adjutant at Gallipoli was commended by Brigadier General John Monash: 'I consider him the best Company Commander in this Brigade'. Similarly his qualities were noted in France when he was mentioned by General Cox for conspicuous bravery at Mouquet Farm.  His Military Cross citation reads:  ‘On night 26/27 August, this officer took over Skyline Trench from the 21st Battn., and showed great initiative and devotion to duty’.   The citation went on to note that Captain Hansen was untiring in his energies to push their position forward in spite of the heavy enemy shell fire and that he had been recommended previously for his work on Gallipoli and at Bois Grenier. Stewart Murray Hansen was wounded at Gueudecourt on 5 February 1917 and died from those wounds two days later, on 7 February, the day of his 25th birthday. Captain A Williamson wrote the following to Mr and Mrs Hansen:  'I am writing these few lines to let you know something of the death of our dear pal, Stewart.  Stewart’s Company was chosen to support another battalion in attack, and it was whilst leading them in this action that he was killed, thus dying a soldier’s noblest death.  Killed in Action – a fitting end to the sterling and noble life he had always lived'.     Collection relating to Captain Stewart Murray Hansen is held at the Australian War Memorial.  It includes letters from Captain Hansen to family in Victoria, written between February 1915 and September 1916, his pocket diaries for 1916 and 1917, press cuttings, hand-drawn plans of Durrant's Post, Sarpi Rest Camp and other places, hand-drawn map of Gallipoli Peninsula, letter of condolence, and sundry other items. He became engaged to Miss D Skens of Aberdeen shortly before he was killed. While overseas Stewart collected signatures on pieces of cotton fabric from soldiers and nurses with whom he came in contact and sent them home to his Mother.  Mrs Hansen and others embroidered the names, bordered each square with narrow strips of red twill and sewed them onto a sheet to make a quilt.  He probably obtained the fabric from those used to wrap tins of food sent to the soldiers.  This quilt is located at the Williamstown Historical Society.
Additional References Williamstown Chronicle:  26 December 1914, p3; 3 April 1915 p2; 31 July 1915 p2; 18 September 1915, p3; 30 October 1915, p2; 11 December 1915, p3; 4 March 1916, p3; 30 May 1916, p3; 14 October 1916, p2; 15 July 1916, p2; 3 March 1917, p2; 5 May 1917 p3 Australian War Memorial Photo H05504 Australian War Memorial Private Record 1DRL/0333 The National Anzac Centre, Albany, Western Australia
Additional Documents and Photographs Click on the image to see a larger view