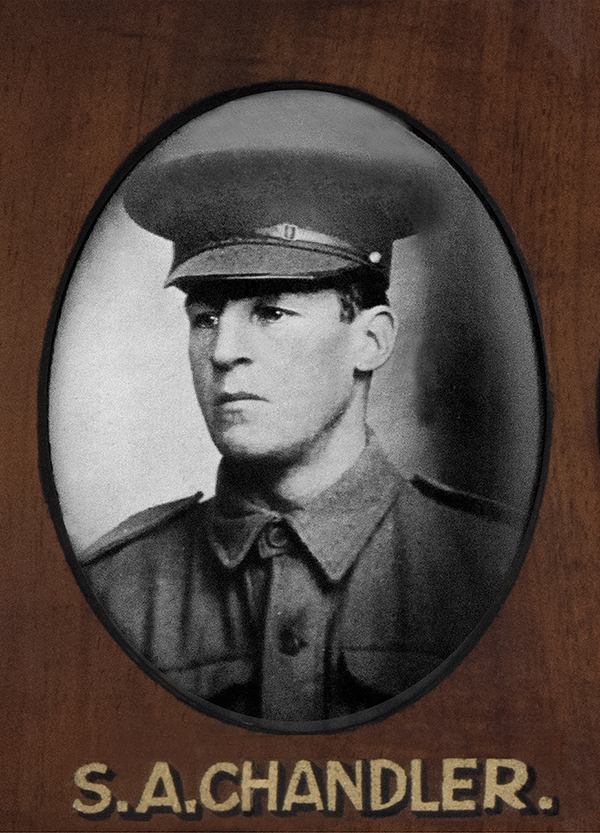 Additional Information You can view a video story on the Chandler brothers on our Video Stories page   David and Emma Chandler had 6 girls and 5 boys.  Frederick, the youngest, was too young but four of the Chandler brothers enlisted – only one returned home. Stephen Albert Chandler, David and Emma’s second oldest son, was 23 when he enlisted in the 8th Battalion in July 1915. He embarked with the 9th Reinforcements on the Makarini from Melbourne and joined the 8th Battalion in Egypt.  In March 1916 he sailed with them to France and the Western Front. Only twelve months after he enlisted, on 25 July 1916, Stephen received gunshot wounds to the thigh and foot and died that night. On receiving a letter asking if Stephen had left any messages for friends and family in Melbourne and to be reassured that he had not suffered much pain, Rev. C Westall, 3rd Stationary Hospital replied that Stephen was admitted in the afternoon of 27 July 1916, his thigh was fractured and gangrene was spreading upwards.  His leg was amputated at 8pm but Stephen collapsed and died at 10pm that night. He was 24 The next of kin badge sent to Emma consisted three bars to indicate that she’d lost three sons in the war.  She was particularly upset when she lost hers in 1924 and applied for a duplicate, offering to pay ten shillings for a replacement. The memories and sadness of their sons stayed with the Chandler family.  A family member recalls that their house in Princes Street was named “SEDWAR” (the initials of their three lost sons, Stephen, Edward and David plus WAR), although, as the house no longer stands, we are unable to confirm it.
Additional References Photos and personal recollections of Max Chandler, nephew, and Kathleen Wilson, great niece Williamstown Chronicle, Saturday 12 August 1916, p2
Additional Documents and Photographs Click on the image to see a larger view