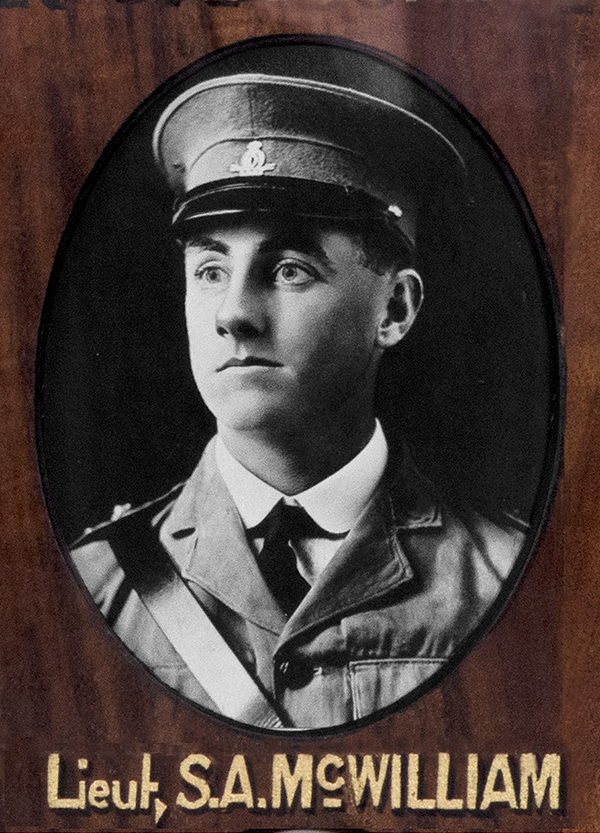 Additional Information Stirling McWilliam was the son of Captain Alexander and Jessie McWilliam of Victoria St, Williamstown.  He attended Williamstown Grammar School and Scotch College before entering Royal Military College, Duntroon with the second intake of cadets on 7 March 1912. He was described by his superiors as the most capable instructor amongst the Staff College Cadets and was given the responsibility of training the 9th Light Horse Regiment’s non-commissioned officers.  General Bridges reportedly said ‘McWilliam is the type Duntroon will be proud of’. Lieutenant Stirling Alexander McWilliam landed on Gallipoli with the 9th Light Horse Regiment on 21 May 1915 and nine days later he was dead; shot through the head while directing fire from his men.  He and his men had been in action for about four hours. 2nd Lieutenant Cameron of the 9th Light Horse Regiment wrote in his diary that Mr Mac, as he was called, was on the observation post when he turned and called to his men “’Stand to arms, Twelve hundred, Five Rounds – Oh God!” and fell back.  It just required the word ‘Fire’ to complete the order…The first officer of the 9th to go.  Poor Mac!’ In a letter to Captain and Mrs McWilliam, Lieutenant-Colonel Miell wrote ‘Your gallant son was…one of nature’s gentlemen.  He was loved and respected by all ranks and his death was a great loss to the regiment’. Lieutenant-Colonel Miell wrote that their son was buried close to where he fell and a wooden cross was placed on his grave.  His service records note that he was buried in Reserve Trench at Walker’s Ridge.  Stirling’s mother was still searching for his grave in 1924 when she notified the military that she had a detailed map of the location sent to her by one of her son’s colleagues.  However when bodies were reinterred from Walker’s Ridge Cemetery in 1923, his grave was not identified and he was buried as ‘Unknown’. His half-brother, John McWilliam, was killed in action on 11 August 1916 at Pozieres, France.
Additional References Williamstown Chronicle, Saturday 24 July 1915, p2 ACT Memorial, Stirling Alexander McWilliam Scotch College WW1 Commemorative Website Hosken, Graeme, Editor: Digger, Magazine of the Families and Friends of the First AIF Inc, No 36, September 2011, p18 (article contributed by Kim Phillips, Spirits of Gallipoli)
Additional Documents and Photographs Click on the image to see a larger view