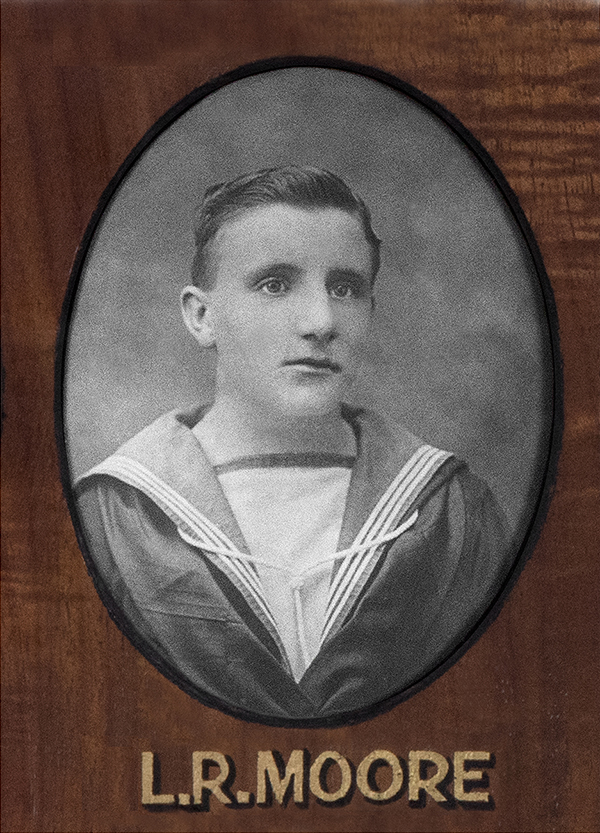 Additional Information Leslie Moore's address at enlistment: 133 Nelson Place, Williamstown, Vic. Leslie's name in on a list of Boy Soldiers at the Australian War Memorial.  During the First World War, the Australian Army's enlistment age was 21 years or 18 years with the permission of a parent or guardian.  Although boys aged 14-17 could enlist as buglers, trumpeters and musicians, many gave false ages in order to join as soldiers. Enlistment of boys was normal practice for the Navy and several died on service during the First World War. The entry for Leslie Moore reads:  Ordinary Seaman Leslie Raymond Arthur Moore (4875) was from Williamstown, Victoria. In April 1918 his ship, HMAS Torrens, was sent to rescue the crew of a damaged Italian destroyer, Benetto Cairoli, in the Adriatic Sea. Leslie was swept overboard in heavy seas. He was 17 years 7 months old. He is commemorated on the Plymouth Naval Memorial, UK. The Plymouth Memorial commemorates those members of the Royal Navy who had no known grave, the majority of deaths having occurred at sea where no permanent memorial could be provided.  The First World War panels of the memorial commemorates 7,251 sailors of the First World War and includes the names of sailors from Australia and South Africa. Click on the following references to read more about the HMAS Torrens, the Plymouth Naval Memorial and the boy soldiers Roll of Honour.
Additional References Ancient Faces, Leslie Raymond Moore, Family Australian War Memorial, HMAS Torrens Australian War Memorial, Boy soldiers on the Roll of Honour for the First World War Find a Grave, Ordinary Seaman Leslie Raymond Moore Plymouth Naval Memorial
Additional Documents and Photographs Click on the image to see a larger view