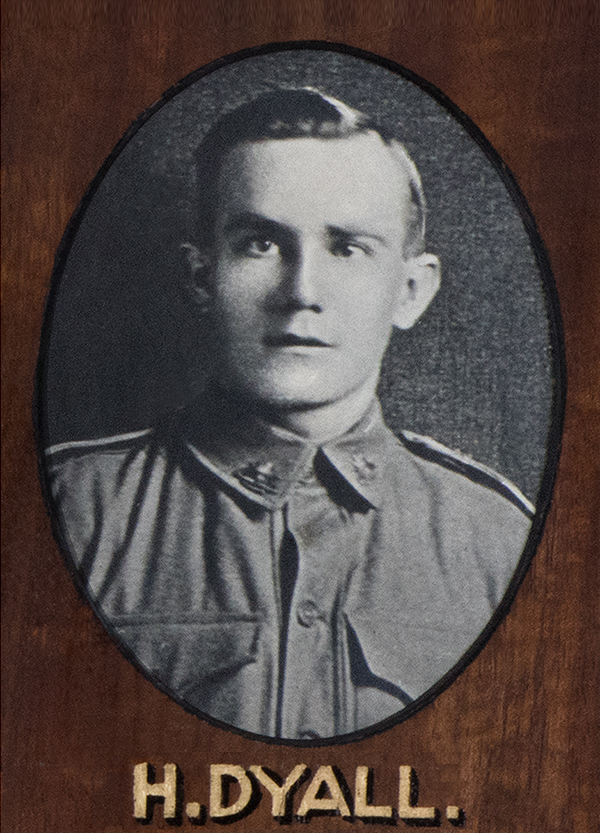 Additional Information Horace Dyall was the second youngest of nine children born to John Frederick and Margaret Dyall. Horace required his parents permission to enlist and his father walked to the Port Melbourne docks from North Williamstown to wave him off. Embarking with the 5th AIF Battalion, Horace Dyall was transferred first to the 59th Battalion and then to the 60th AIF Battalion in Egypt. The 60th Battalion was raised in Egypt following the evacuation of Gallipoli as part of the increasing numbers of the AIF. Half of its recruits were Gallipoli veterans from the 8th Battalion, and the other half, fresh reinforcements from Australia, the majority were Victorians.  They trained in the hot desert sands of Egypt before embarking for France.  Soon after arriving in France the 60th was embroiled in the battle of Fromelles where it incurred 757 casualties. Horace was hospitalised with Trench Fever in May 1917.  As he returned to his battalion in July, he would have fought with his unit  in a major battle at Polygon Wood in September 1917. On 26 September Horace received a gunshot wound to his left leg, below the knee and was sent to the Military Hospital Lewisham. Following time training in England and another stint in hospital with scabies Horace Dyall rejoined his unit in March 1918. Horace Dyall’s records don’t record exactly how and where he died but 1918 saw the 60th Battalion in the defence attacks at Villers-Bretonneux in April and Amiens in August.  It was during this time of intense fighting, only four months before the end of the war and ten days after his 22nd birthday that Horace Dyall was killed in action.
Additional References Photo and family research by Brain and Marie Bamford per Joan and Colin Dyall. 60th Australian Infantry Battalion, Australian War Memorial
Additional Documents and Photographs Click on the image to see a larger view