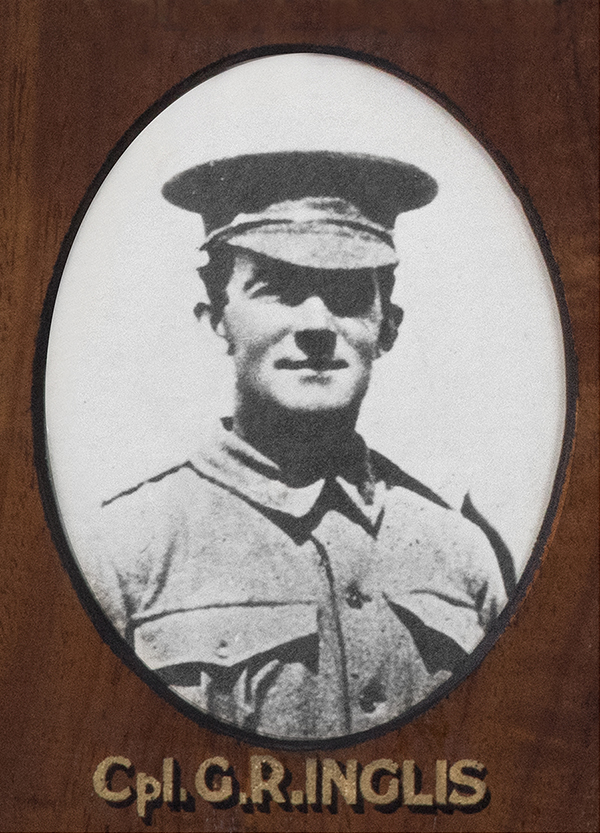 Additional Information You can view a video on Gordon Inglis on our Video Stories Page   Gordon Rankin Inglis was the son of Lydahalia and the late David Gordon Inglis (Gunner, Warrant Officer, Victorian Naval Forces) of Railway Crescent, Williamstown. Prior to enlisting Gordon was a Pipe Sergeant in the South and Port Melbourne Pipe Band.   Of the band’s 26 pipers and drummers at the outbreak of the war, 22 enlisted, and of that number seven lost their lives. He was a Clerk in Victorian Railways Rolling Stock Accounts Office and was a member of the Railway Athletic Club. Gordon Inglis sailed on the First Convoy of 38 ships which departed from Albany, Western Australia on 1 November 1914. On 26th April he received a bullet in his arm and lung at Gallipoli and was evacuated by ship to Alexandria.  In a letter to his Mother, Gordon credited Hugh Blair (also on the Williamstown Town Hall Honour Board) with saving his life on the ship:  'He nursed me day and night, never leaving me.'  He spent a few months at the hospital in Alexandria where he underwent three operations to remove the bullet which was sitting close to his heart.  As his wounds were so severe, he was transferred to the Red Cross/YMCA Hospital, Swansea Wales in October 1915. The year before Gordon enlisted he had won the Australian Amateur Pipe contest in Sydney.  On hearing there was a champion bagpipe player lying seriously ill in the Swansea Hospital, Piper Donald Fraser (described in the local paper as the ‘genial giant, Donald Fraser’) visited Gordon and played for him and the other wounded soldiers.  Piper Donald Fraser returned to play The Flowers of the Forest over Gordon's grave when he died. The local community was full of goodwill for the only WW1 Australian serviceman to be buried at the Danygraig Cemetery, Swansea, erecting an inscribed oak cross.  The Parks Superintendent, Mr Bliss sent Gordon’s Mother a copy of the newspaper article and told her that he’d had the grave turfed and planted with spring plants.  He also said that fresh cut flowers were regularly placed on the grave. Gordon was remembered by his fellow workmates at the Victorian Railways Rolling Stock Accounts Office who placed a notice in the newspaper shortly after his death.  Gordon Rankin Inglis is also remembered at the Scottish National War Memorial. In October 2016 Lindy Wallace from Australia, who researched Gordon's story for the Sons of Williamstown, travelled to Swansea and laid a bouquet of Australian native flowers on his grave.  Sons of Williamstown thanks Phil Treseder of the Swansea YMCA Board for his welcome to the YMCA and his assistance in accessing newspaper articles from local newspapers.
Additional References The Age: Wednesday 19 May 1915, p11 Williamstown Chronicle: Saturday 22 May 1915, p2;  Saturday 18 March 1916, p2 Footscray Chronicle: Saturday 31 July 1915, p2; Saturday 18 March 1916; Saturday 7 July 1917, p2; The Argus: Thursday 3 February, 1916, p1 Lewis, Bernard, Swansea in the Great War, Pen & Sword Books Ltd, South Yorkshire, 2014, p50-52 Photo of Swansea Hospital: Swansea Museum Collection, Phil Treseder, Trustee Swansea YMCA List of Australians born in Scotland: Lt Col RJ Binks, The Scottish National War Memorial R Young, South and Port Melbourne Pipe Band The National Anzac Centre, Albany, Western Australia
Additional Documents and Photographs Click on the image to see a larger view