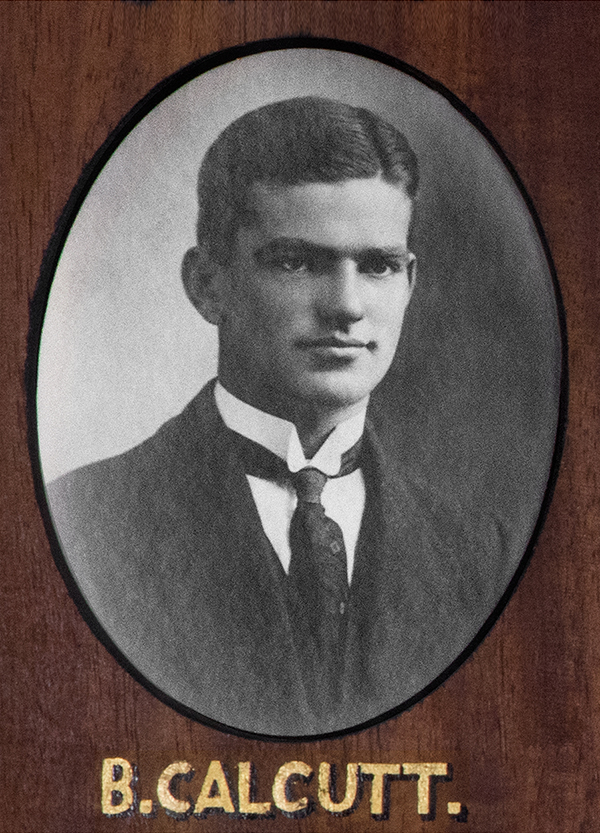 Additional Information Brendan Calcutt attended Williamstown Primary School, Melbourne Grammar and Longerenong Agricultural College. Brendan Calcutt was a prisoner of war for sixteen months prior to his death.  At Gallipoli for less than a week, Brendan was reported missing on 08/08/1915, following the assault on Hill 971. In February 1916 the American Embassy reported that Brendan was being held as a prisoner of war in Bazanti, Taurus Mountains, Turkey, the camp from which prisoners were used to build the Bagdad Railway. Brendan's health deteriorated and his immune system was unable to fight a small infection when he accidentally pricked his finger.   He died of Septicaemia.  He was buried in his uniform at Belemedek, Turkey and buried at Hadji Kir Cemetery with a service conducted by Dr C EM Jones, the British doctor who had treated him. As the cemetery was removed in 1927 his body was exhumed and reinterred at North Gate War Cemetery, Baghdad, Iraq. Brother: Gerald Calcutt (474), killed in action 24 May 1915; Clare Calcutt (350) enlisted September 1914 in the 8th Light Horse Regiment.  Clare was invalided from Gallipoli and returned to Australia in July 1916.  Even though he was discharged as medically unfit, he attempted to re-enlist twice more during the war, in 1917 and 1918.
Additional References Military History and Heritage Victoria, Peter Fielding
Additional Documents and Photographs Click on the image to see a larger view