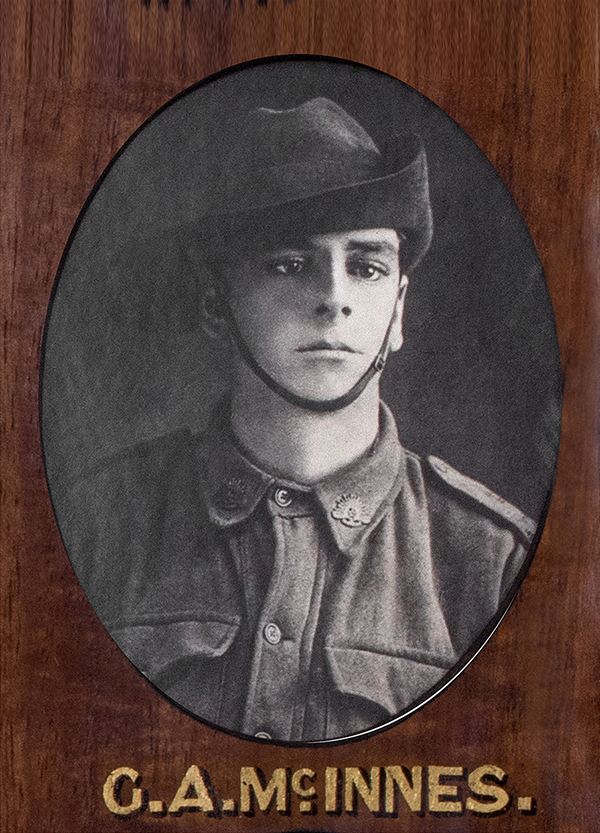 After leaving the North Williamstown School, George joined his father, Angus, working at the Newport Railway Workshops.  He enlisted in 6th Battalion in May 1915 and embarked for Egypt and Gallipoli on the HMAT Anchises on 26 August 1915.

A letter from one of his mates told Angus and Hannah McInnes that after landing at Gallipoli, they went into the firing line on 2nd December 1915.  They were there for 7 days when George fell ill.  He was admitted for medical care on ‘Anzac’ on 9 December, transferred to the 15th General Hospital, Alexandria on 13 December and died on 15 December, 1915.   He was 19 years old.  He died of Enteric Fever otherwise known as Typhoid.

Sickness and disease was one of the greatest problems on Gallipoli.  Neither the officers nor the men properly understood the need for sanitation.  The heat, unburied bodies and poor sanitation led to a plague of flies which led to the outbreak of diseases; dysentery, diarrhoea and enteric fever.  Except for May and August during the Gallipoli campaign, the proportion of men evacuated with illness exceeded those evacuated because of wounds.  George McInnes landed prepared and ready to fight only to be cut down by illness.

George’s mate described him as a ‘very cool chap’ who was not easily fazed by the shells landing close by him and noted that he ‘is very much missed by his pals of the firing line’.
He was also very much missed by his family.  His father kept him close to his heart by wearing his medals and his sister, Kitty, kept a photo of him, in uniform, prominently displayed above the sideboard until the day she died.

Mairi Neil – personal interview and: We will remember them… and celebrate their life and our links to the past!

Gallipoli and the Anzacs